This may be too conclusive and judgmental of a title to review the first (and let’s hope not final) art fair in Brooklyn. It didn’t help at all and I can only blame myself for having attended the fair later in the evening when the crowd was non-existent and gallerists straight up walked out of the building. To think Dumbo topped Williamsburg or Bushwick in representing the Brooklyn Art Scene boggles me a bit and I wonder how that decision came about. I surmise it has something to do with money and Two Trees Management.

It also didn’t help that I decided only to focus on James Kalm and Loren Monk’s curated show titled Brooklyn Art Now, presenting a survey of Brooklyn based artists in all steps of their career. The exhibition was presented in three rooms of a gigantic gallery filled building, most of which I ignored to stay focused on his show. That was a bad move as they provided the only decent art viewing experience with clean presentable spaces.

Walking over to 81 Front Street and 1 Main Street I was mortified by the vast spaces failed to accommodate with the basics: clean standing walls, avoiding the use of patchy cement walls, and even lighting. Studio lamps provided for pathetic attempts to unevenly, sloppily shine light on the works and I was embarrassed that this was how Brooklyn’s signature nitty gritty down home art was presented: poorly.

I’ll stop the negative ranting here and focus on the Brooklyn Art Now exhibition. Here are the highlights:

In the video salon, a series of videos curated by Robert Hooman was screened on a couple platforms: a flatscreen, projection, and old monitor. I caught a video titled Oops by James Beckman, a 10 minute collage of appropriated amateur videos capturing cringeworthy moments where the camera is accidentally plunged into a pool, dropped to the floor, and pecked by an ostrich. The effortlessly smooth transition without a blank screen or awkward silence in store is a result of skilled editing. It represents appropriated art at its best.

Josh Willis’ stormy landscapes are filled with tension and movement between all its formal elements. Thick layers of paint are suffocatingly opaque and I wish to do nothing more than free the painting from itself. via Centotto 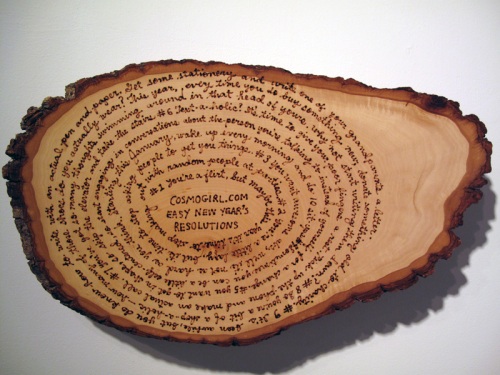 Jen Dalton’s New Years Resolution from Popular Culture series packs her seasoned comicritical punch in more ways that one. The wrap around text representing the age of a tree stub, or that of a single human, or that of an entire human race combined with the ingenious use of said stub is crafty (meaning coy, not etsy). The resolutions read as wisdom for the wise, the wise being the most banal and demented of women needing constant reiterations for “happiness”. I am one of these women.

Eric Doeringer’s Boot Legs series is successfully just that. It reflects an artist’s concern about being an artist in the art world, struggling for recognition, criticizing an off balanced industry, and for viewers like us, the potential to possess what is out of reach. The editions are endless and the artist started off selling them on the streets in Chelsea, chinatown style.

Meg Hitchcock takes text from various sources, whether its Jean-Paul Sartre or the Koran and painstakingly cuts and pastes individual letters into a resulting shape on paper or in the case of her show at Famous Accountants, installed directly on the wall. Talk about patience and perseverance.

Despo Magoni‘s series of drawings wraps around an entire wall from one side to the other, weaving a dark narrative that seems to stems to the deepest innards of the mind. It’s dark, messy, compulsive and slightly angry. 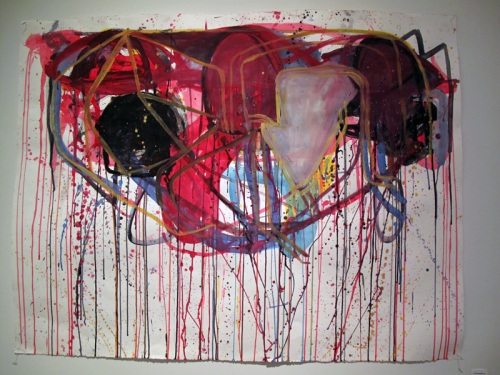 The name Julie Torres rings a bell and I can’t remember where I might have last seen her work or heard her name. Nonetheless this large dripping painting is provocative for its wide freeing strokes and deep color palette, makes me want to add some strokes on top of it for pure gratification purposes.

My favorite piece in the show was Nick Yulman’s Song Cabinet. It’s an interactive sound piece, but with a handmade nerdy gadgetry feel to it. There are four drawers each filled with random trinkets like bottles and picture frames attached to sound making wires. They’re all synced in rhythm so that when you open all four at once you have a beautiful melody of beats. It’s pretty nifty.

Craig Olson cuts up his canvas and paints on the edges of its world. This direct engagement with physical space and intermingling between viewer’s realm and that of the canvas creates tense vibrations. 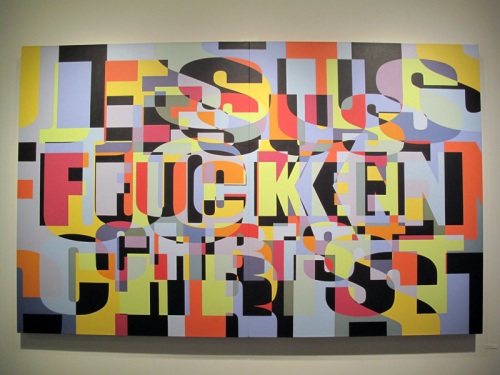 That Peter Fox’s painting screams vulgarity while the wall label censors the title as Untitled (Jesus F***g Christ) is funny. 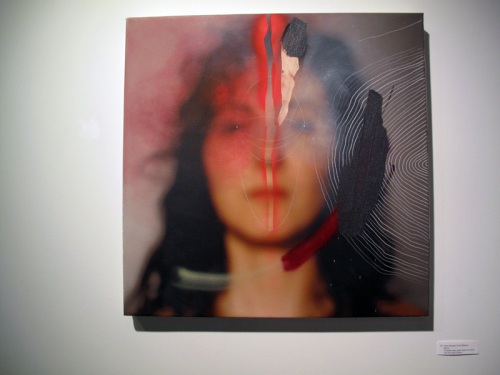 Jenny Morgan collaborates with David Marmor in this painting titled Mystic. I’m convinced they should do more of these. They’re beautiful, stoic, and dare I say, more powerful as a duo.

I had the luck of running in to Mr. Kalm, accosting him for a short video interview. Please excuse my dimwitted giggling.