Pulse is the Fairest of them All

Pulse was the first art fair I visited and it was the perfect introduction to a chaotic weekend. The best word to describe it would be, pleasant. Gallerists were extra friendly and so ready & willing to engage in conversation, not to mention there were multiple occasions where the artist was present ready to hand over a business card and nervously defend their techniques. Where I wouldn’t dare approach anyone working a booth at Armory I had absolutely no qualms about asking who was who and how much was what at Pulse. It was very comfortable and dare I say, community prone.

The works veered away from top tiered snooty art and highlighted more color, patterns,  collage and good ol’ crafts. It was homey and down to earth and far more accessible than I would have imagined. There were any New York based galleries whose names I didn’t recognize, which only shows you how much I’ve fallen out of the art bandwagon. I need to hop back on, stat.

Here are my highlights:

Another three dimensional photo collage, this time from artist Gregory Euclide. It’s not as playful, more warpy, and dramatically breaks away from the canvas.

Unique linocut prints by Jens Schubert are mystical and beautifully rendered with layers of some 30 individual cuts. 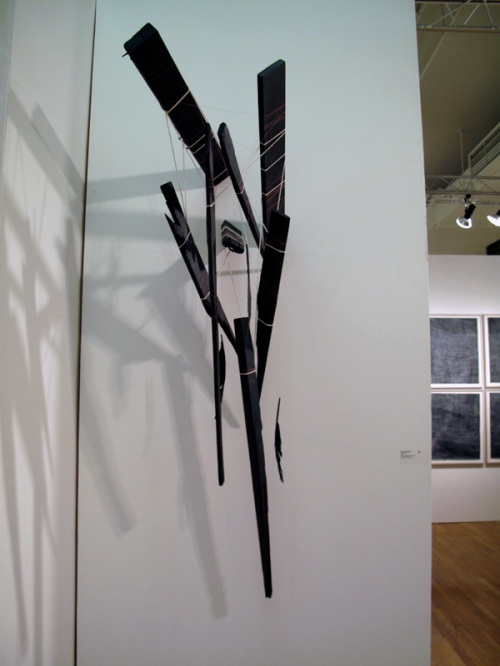 Sticks hanging on for dear life by Sarah Hardesty. That they’re supported by thin week pieces of string creates a softer mood considering their threatening strips of blackened wood. The feather aimlessly hanging suggests death, somberness and perhaps even hope.

The booth at Luis de Jesus was filled with giant blindingly bright abstract paintings by Heather Gwen Martin. The artist seems to take the formalist of practices between form and color and plays with the elements the way a kid manipulates play-doh, reminiscing on real life objects or happenings (clued by their titles) and remaking them with her own context and language. This one, titled sniper looks like a bird shooting out of a human’s eye whilst a gleam of light hits the center of a grasshopper. It’s all what you make of it. I found it touching to find the artist at the booth earnestly and nervously explaining her work to me. I walked away and she tapped me on the shoulder and said “This might be dorky but here’s my business card if you have any questions”. She must be new to the art world. Again, touching.

The strongest work I found at Pulse was a video titled Element by Amy Greenfield. Shot in 1973 by Hilary Harris, the 12 minute video records the artist writhing in a sea of mud (in Long Island). Her naked body is covered from head to toe and her movements are both violent and sensual, uncontrolled and forceful. The camera zooms in and out wildly following her possessed movements with equal fervor and fluidity. Watching the video in the context of contemporary art, specifically within the confines of an art fair makes it distance and unfitting but I’d imagine watching this video during the time of its completion would be revelatory.

David Maisel’s aerial photographs of natural landscapes intervened by greedy human interactions are too convincingly abstract and uncorrelated to anything but formalist intention that in its execution exceeds its conceptual framework. I tried to get an explanation from one of the gallerists and she was too vague for me to comprehend. All I walked away was that the photographs were not digitally manipulated as I assumed and were pictures of natural settings manipulated by interventions.

The title of this painting by David Antonio Cruz, Dorothy Get Off My Chair, offers a narrative submerged and drowning in a sea of unidentifiable garbage. The entanglement can be taken inside a dream, a fantasy, a nightmare, on the floor of a messy apartment post-marital argument, or as a manifestation of a single emotion: frustration, helplessness, desperation. I like how moody and stifled it is.

The artist Greely Myatt charmingly stands in front of his wooden sculpture, part of a series using reclaimed wood and signs. We had a sweet conversation, me googly over his southern accent and manners, clad in worker’s pants and unfitting within this posh environment. It was a welcomed conversation as he discussed his process and career as a teaching artist.

One of my favorite finds at the fair: Series of meditative collage works by Gary Ross Pastrana. There are no figures to be seen, all colors and shapes cut out from various sources. The landscapes created within are hectic and non-linear but there’s a calm to it, perhaps from seeing clearly the process that went to creating each index card. Inspiring me to make my own. 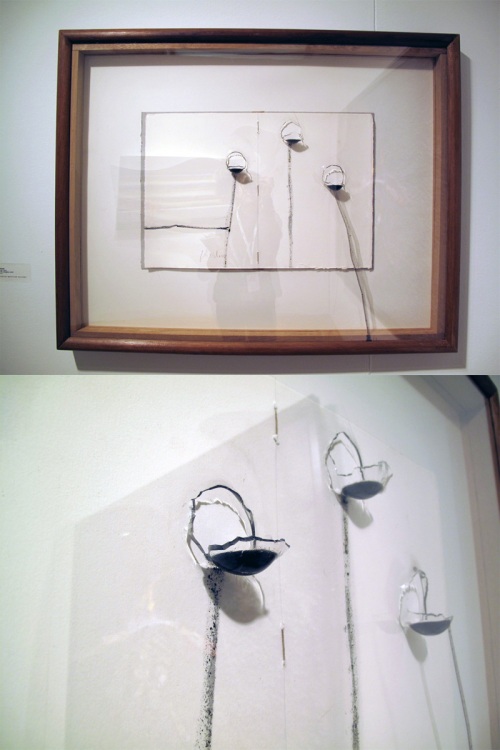 Jordi Alcaraz titled this trippy ripped glass on glass ink drippings as Drawings, manipulating the material that literally frames the work to enter the conversation for creation and viewing.

Anthony Lepore is another artist exploring nature and human invention/intervention. The smooth transition between two cropped images collaged atop or next to one another is a complex and jarring juxtaposition.

Beka Goedde’s works are centered around geometry and space. They are to be viewed silently with austere contemplation. At least that’s how I’m compelled to view them.

Joseph Burwell’s solo booth was my favorite installation at the fair. Titled School of the Viking Spaniard: Reconstruction of the Garage is a humorous reflection of his studio practice, bringing along random found objects collected and a scattering of colorful architectural diagrammatic drawings.

2 responses to “Pulse is the Fairest of them All”